Luisa needed to have a big product launch. But she was worried her audience was tired of her offer — and sick of launches in general.

She discovered how to make her product feel new and exciting. Plus, a few tweaks to add serious revenue once her cart opened.

Luisa made over $790,124 from her launch. This reinvigorated her passion for her business. And set it up to grow in new, exciting ways.

The next year, she wanted a million-dollar launch.

But those around her insisted she try something else. As Luisa says:

“People kept saying ‘launches are dead.’ I heard that over and over”.

Luisa began to doubt that she could replicate her success.

“I was afraid my list was tired of the program. They’ve seen it too many times and don’t care about it.”
Since most of her revenue came from launches, she knew she had to make this work. Otherwise, it would be a disaster for her business.

“Am I going to get value out of this?

Luisa knew she needed help. She kept hearing about all the different coaches and methods she could use. But the one name that came up over and over again was Ron Reich.

“I heard about Ron from people I respected. I kept hearing about him from all these angles.

Then Selena Soo shared a Facebook post about how she was working with Ron. She said he was great and helped her get to that next level.”

Luisa doubted he could help that much. But she realized one idea could create a massive breakthrough in her business.

So after seeing Selena’s post, she signed up for Ron’s 7-Figure Launch Intensive.

This is his 3-day workshop where he teaches a handful of entrepreneurs his “Excalibur Method” for a massively successful launch.

“It’s the little ideas that make a big difference”

Early on, Ron relieved her fear that “launches were dead.”

He explained how they’ve been going on for decades. And how they’re no different than the marketing campaigns you see from companies like Apple or Starbucks.

“Ron talked about how having a great launch is about holding yourself to a higher standard. The cream will rise to the top.”

Luisa found it extremely helpful to get a 3rd perspective on her launch plan. Especially from someone with so much hands-on experience.

By the end, she knew there was still more to learn.

So she signed up for one-on-one coaching with Ron. They met on the phone every other week for three months before her launch.

On these calls, she got even more guidance on how to blend the Excalibur Methodwith her existing launch strategy.

Right away, she found the answer to her biggest problem: how to make her offer feel “new”.

“I got off every call with exciting things to implement”

He showed her what made her business successful. And how the relationships she built was what separated her from everyone else teaching the same thing.

So he suggested she make her pre-launch videos about relationships.

This would help her play to her strengths and stand out from the competition.

“Everyone talks about building lists. Ron said, “let’s focus on what separates you.” So I taught my methods for creating relationships instead of list-building.”

Luisa was excited by this new angle. It gave her audience a fresh perspective on what she was selling. And helped her avoid talking about the same thing over and over. 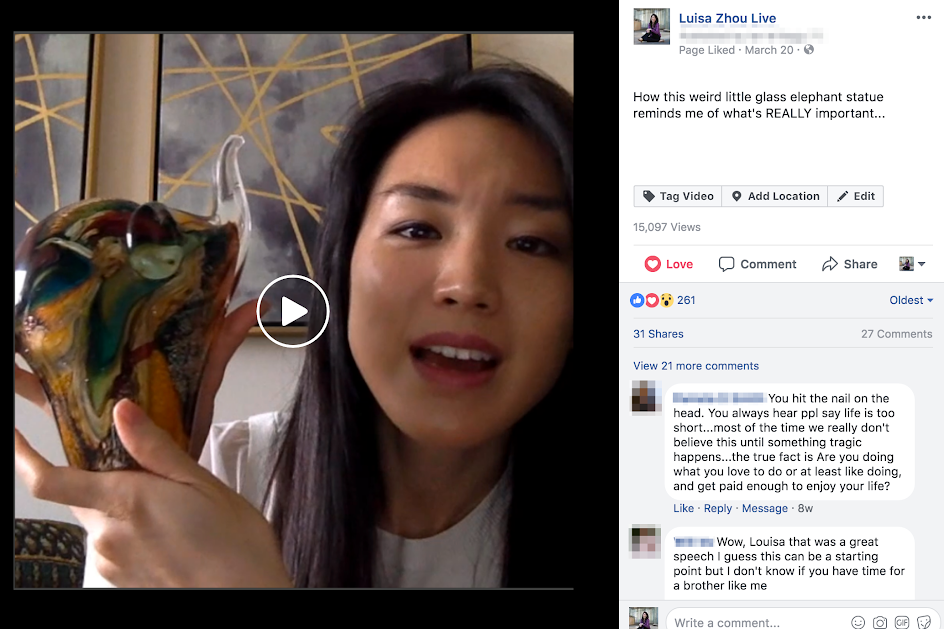 But they weren’t done there.

One of the next things they worked on was fixing Luisa’s high-ticket offer.

But she hardly promoted it. It was just tacked on to her main sales page as an afterthought.

So Ron showed her how to use his special “High-Ticket Upsell Sequence”.

A week after buying, her customers would get an email showing them the value of one-on-one coaching.

Simply setting this up was a big confidence boost for Luisa.

“I had a coaching upsell, but it was just something I threw out. Ron helped me make it more systemized. It felt so much better to do that than to just have people find me.”

A third change was the open-cart bonuses Luisa sent her list during sales week.

Luisa had used bonuses in the past, but they never seemed to work.

Ron helped her make them more enticing. Then showed her a way to deliver them so she’d get more sales early.

“In the past, I had bonuses that expired at the end of the week. I had never done a one-day or 48-hour bonus mid-week.

The first bonus was a group call with me. That was only available on the first day. Then we had another 48 hour bonus mid-week.”

But then, she hit a major roadblock…

Luisa had done the math. She knew she needed 10,000 new leads to have a one-million-dollar launch.

But there was a problem.

The cost per lead on Facebook had skyrocketed. That, plus a few other lead-generation issues meant she only got half as many new subscribers as she planned.

This could have been a disaster.

But her new messaging created a ton of buzz during her pre-launch phase.

And her new “fast action” bonus pushed people over the fence right away.

So when she opened the cart, sales came pouring in.

“We were at $150,000 in sales when I went to sleep Monday. Then I woke up Tuesday and saw all these sales came through.

All the fear I had that people didn’t like launches, didn’t like my program, and that my audience was tired of me went away.”

“Half our sales came from cold traffic”

Luisa didn’t have the same desperate, frantic energy she had in previous launches. Because she made over $300,000 by day two of sales week.

So she was able to relax and enjoy the rest of her cart-open phase.

And half of them came from cold traffic.

Considering she only got half as many leads as planned, Luisa considers it her best launch to-date.

“Launches are a bad business plan”

Luisa was thrilled with her results.

But she knew relying on launches to grow a business wasn’t a good strategy.

So she asked Ron to help her create a plan to grow her business.

Together, they outlined a strategy that fit Luisa’s goals.

For example, they decided to break her $3,000 flagship course down into smaller offers.

These less expensive programs would be a “feeder” system to her main course.

After they bought all that, she would offer her high-ticket coaching program.

They’re going to evergreen the entire process. So Luisa won’t have to depend on launches. And will instead have a steady flow of sales coming in daily.

“Before I was struggling to see how everything I was doing fit together.

But Ron helped with my big picture strategy. Now I have a clear plan for my business. I’m not just scrambling to make money.”

“I’m moving faster than ever”

This clarity has reinvigorated her love for her business.

She’s excited about what she’s doing. And sees a path to grow and help more people.

So she just signed up for another 6-months of coaching with Ron.

“I love being able to bounce ideas off Ron.

Each call I say: ‘Here’s what I’m thinking for the next offer or campaign, I’d love your feedback.’

He adds new ideas that get me excited. Then I come up with more ideas and it’s this awesome spiral.

I feel I’m having more fun, being more creative, and moving faster than ever.”

Want to take your launches and business to the next level?

For a limited time, Ron is accepting applications into his A-Players Inner Circle.

In this 6-month program, he coaches you through his “Excalibur Method” that can double or triple your launch revenue.

You’ll also map out and execute a plan to grow your business beyond launches. So you can have strong, steady cash flow through high-ticket and continuity offers.

This isn’t some “one-size-fits-all” program. Everything is tailored to you and your business.